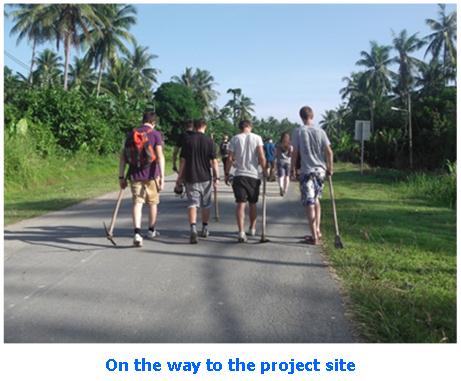 During the summer holidays 15 students from Collingwood College (accompanied by Mr Jarmyn, Miss Evans and Susan Hatchell from True Adventure) went on the expedition of a lifetime to Borneo from 20 July until 14 August.

The expedition required the students to undertake specific team roles at all times and Amy Wilson was tasked with the team leader role on the first day.  She successfully led the team through transit and ensured they arrived safe and sound (if a little tired from the journey) at a backpacking lodge in Kota Kinabalu.  The rest of the students were split into sub-teams so that some spent the day booking accommodation, others focussed on sorting out transport for the duration of the expedition and the rest of the team went out to stock up on food supplies and other items which would be needed for the project phase of the expedition.

During the project phase the students stayed at a fantastic eco-lodge in the jungle at Tampat Do Aman where they had to get used to cold showers (quite refreshing after a hard day’s work in a tropical climate), composting toilets, wild animals (such as the Lipan centipede) and ‘Fred the Duck’ who would try to stop them getting to their rooms! 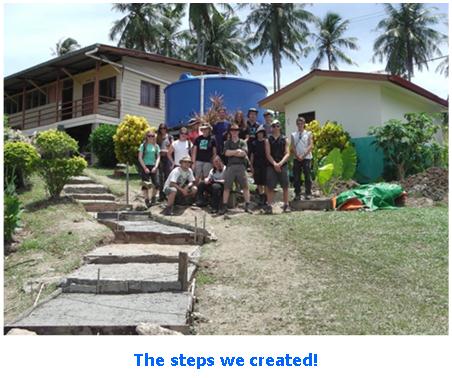 a local school using gardening tools, cutting step shapes into it and concreting the steps to enable the young children to access their playing field more easily.  This phase was physically and mentally challenging to all involved, especially when the heavy tropical rains destroyed a day’s work, but Collingwood’s students were highly commended by many on their level of determination and commitment to completing the project.  Watching the local children running up and down the completed steps at the end of the week led to a real feeling of success and satisfaction.

Before leaving, the students got to spend some time with the local children on the nearby beach where they organised a circuit of sports day challenges which included sack races, long jump, real races and the egg and spoon race.  This was a great way to wind down after a week of work and they were able to reflect on the time spent here around a camp fire.

The team then travelled via Sandakan to the entrance park of Mount Kinabalu to begin the second phase of their expedition.  They had a hearty meal and a good night’s sleep before beginning their trek up the mountain to Laban Rata on Mount Kinabalu at just over 3000m.  Here, they had plenty more food at the end of the day and a power nap to rest before having to get up again at 2am.  By 3am they were all kitted up with head torches and ready to begin their climb to the summit.  They battled strong winds and tired legs to reach the summit at 4095m before descending back to Laban Rata for late breakfast.  The rest of the day was spent descending the mountain and looking forward to dinner at the bottom!

The final phase of the expedition was for some well-deserved rest and recuperation.  This began at Poring Hot Springs where they relaxed in the geothermal heated pools.  They then toured the Sepilok Orangutan Sanctuary where the team were very lucky to see a large number of Orangutan’s at feeding time.  They also experienced the Gomantong caves where they saw the Swiftlet nests used to make ‘Bird’s nest soup’ and a great many bats and creepy crawlies.  Following this was a cruise along the river where the students were lucky enough to see a variety of birds and primates including the Proboscis Monkeys.  This was followed by a night jungle walk where they saw lots of sleeping bats and birds as well as some leeches – although luckily none landed on anyone!  Before heading back to the capital city, many went to explore the Rainforest Discovery Centre and walked along the canopy walkways taking in the views.

The final few days were spent exploring the markets of Kota Kinabalu haggling for souvenirs and reminiscing about the highlights of the expedition over dinner at the night market.