3rd Place for our boys in the Surrey Plate play-off. 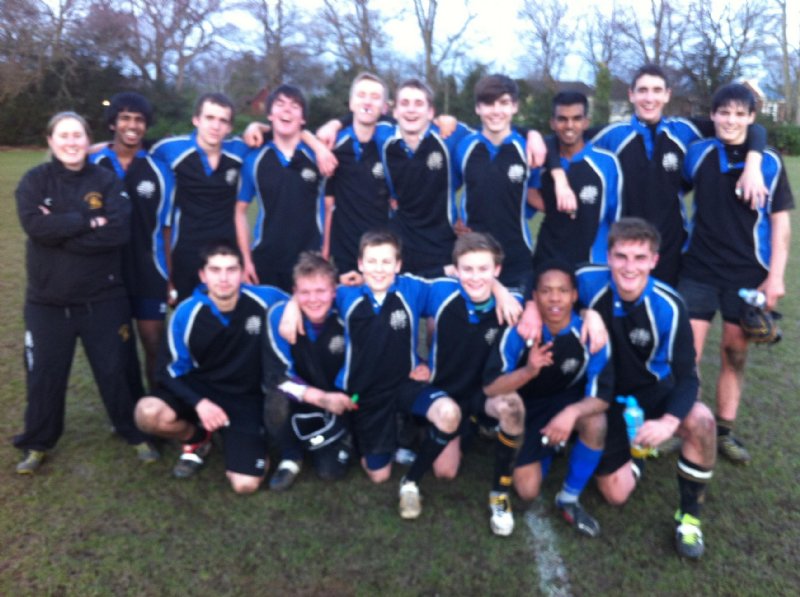 On Friday 15 February the Year 11 boys’ rugby team competed in the Surrey Plate play-off for 3rd place against Howard of Effingham.   During the weeks before the final the boys trained hard as a team and worked together to achieve the win they desired. Whilst training they concentrated on support play through offloading, forward pods and set plays for the backs. This allowed Collingwood to be an organised team and paid off towards the end of the match.

Collingwood opened with a try from fullback Tom Mallaby with simple hands down the line in the first half, but Collingwood failed to make the conversion. Shortly afterwards, due to a penalty inside Collingwood’s 22 m line Howard of Effingham had a great position to score and as they kept picking and going from the back of the ruck Collingwood lost their defensive line and shape for them to bring the score to 5-5. Collingwood held their composure well with good kicking from scrum half, Brad Passfield, and rucking from the pack that did not let the opposition have possession easily.

The team started the second half really well with Collingwood turning up the intensity with strong defensive tackles and good periods of possession. Inside centre Charlie Wheeler got the ball quickly from Tom Young at fly half as a result of good rucking from the forwards to score by the posts. This again was not converted and made the score 10-5. Howard of Effingham came back at Collingwood with good play between their scrum half and fly half to pass blind side to score in the corner easily. They also missed their conversion to make it 10-10. Soon afterwards from the restart Collingwood had phases of forward possession and Charlie Wheeler took advantage of a gap shown to him by his opposite number to run from inside the halfway line to score under the posts. Tom Mallaby converted the kick to make it 17-10. During the next 15 minutes both sides swapped possession on numerous occasions. Special mention must be given to Chris Newman for some big tackles on their winger. Eventually Collingwood gained the upper hand as our organisation, structure and patience paid off with Collingwood looking the sharper of the two teams. The ball made its way down the line through the centres with Tom Mallaby running onto the ball at full pace to sprint between and past three players to score the final try of the match, which he also converted. Collingwood won 24-10.

Rugby in my opinion is the ultimate team sport. The boys demonstrated this with each of them playing their position excellently from 1 to 15. I asked them in the pre-match team talk if they could be brave and play for each other for their last ever match as friends at College. The team definitely showed their bravery and teamwork and I’m incredibly proud of them for their commitment to each other, myself and the College. It has been phenomenal. They have set a good example to other students that hard work and commitment pays off.

I would like to thank the parents for their support throughout the rugby season.