Successful start to the rugby season.

On Monday 9 October St. Bede’s travelled to Collingwood with their U13 girls rugby team.  For many of the girls this was their first game of contact rugby and thoroughly enjoyed themselves.  We lost 6-5 in the last play.  The Week afterwards Monday 16 October we played a tournament hosted by Collingwood with visitors being SJB, Salesian and Weydon.  The U13 team won all their games in style.

Furthermore, that same week, on Wednesday, they played Ash Manor and comfortably won.  We have two Surrey players for the U13 team Jesse Gates 8I and Blyth O’ Mahoney 7C.  I am very excited to see how the new Year 7s develop and encourage all of them to join a local rugby club in their area. 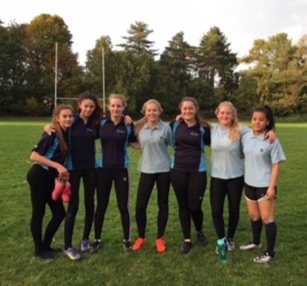 On Monday 16 October the U15 girls that played last year rallied round and got a very good team together.  For a few girls this was their first game of contact rugby, learning how to tackle 30 minutes before the teams arrived!  All of the U15 girls were excellent showing lots of natural ability.  We won the tournament v Weydon in the last play.  The tournament was hosted by Collingwood, with visitors being SJB and Weydon.

The boys have played three games so far.  We have struggled with serious injuries especially with concussion meaning players are out for 23 days at a minimum.  We played away against Orleans Park in the first round of the NatWest Bowl on Monday 25 September.  Although it was a very close game we eventually lost to a converted try from a tap penalty on our defensive 5 metre line.  However, from that defeat they overcame their  disappointment to convincingly beat Reigate school 41-19 on Tuesday 10 October at home.  The boys were very excited about playing at home for the first time.  This game was good as newer players to school rugby really showed their natural ability for being able to beat players and make tackles.  Finally, the last day of College before half term we travelled to High Wycombe with a depleted team of our regular club rugby players to play Sir William Ramsey.  We stopped the game after 35 minutes as we were winning very strongly at 73-0.  Next rounds are Kennet School in the NatWest bowl and Hinckley Wood in the Surrey Cup.  Well done to everyone especially the new boys that have enjoyed coming to games and playing.

Rugby training for girls is on Wednesdays after College for U15s and U13s.  Boys training is Thursdays for all years.