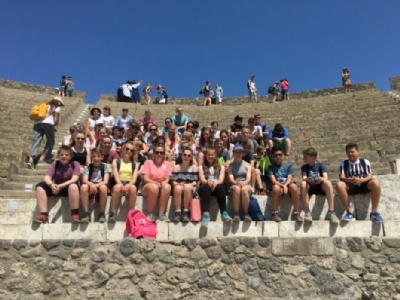 50 students travelled to Italy in the May half-term break, visiting many places including Herulaneum, Pompeii and Capri.

Italy - the world of sunshine, ice cream and sizzling heat (and limoncello in the case of the teachers): that’s where fifty of us were in May half term this year.

On arrival at Rome Airport, we had to wait quite a while for our coach to arrive, to take us all the way down to Herculaneum. This is a town that was destroyed in 79 AD by a volcanic eruption.  Sitting in the shadow of the volcano, Mount Vesuvius, is this little town where many people tried to run to the sea, but died on the journey, and their bodies are lying in stables and small buildings around the town.

From there, we had another short journey to the hotel, Giosué a Mare, which overlooked a stunning bay, a white beach and beautiful sunsets on the sea. The first full day of the trip rolled around much too early for some, but a delicious continental breakfast woke us up!  This was the day where we were driven in two separate vehicles along the beautiful Amalfi Coast, on which stood several small, rustic towns that held many souvenir shops and gorgeous houses.  Later on, we had a boat ride along the coast for forty five minutes, where we could see every bit of the Amalfi Coast from the little cruiser.  We visited Scala on the way back to the hotel for dinner, which was pasta, meat and vegetables.  Pudding was (of course) an ice-cream sandwiched in chocolate biscuits.  Everyone was tired, but the day wasn’t over!  We departed in the coach for Sorrento, where we were given a long time to shop on a pretty street full of souvenir shops, sweet shops and handbag stores.  At ten fifteen, we arrived back at the hotel for a nice sleep.

The third day dawned bright and sunny and we made our way back to Sorrento, where we caught a huge ferry to Capri.  Here, we boarded a smaller boat which took us around the island.  We saw the house of Giorgio Armani, which stood very grandly on the hill.  We boated inside a cave and under a magnificent archway, and spotted enormous caves in the cliffsides.  We spied the highest point of the island, Monte Solaro, which stands 589 metres high.  After the boat ride, we got back on solid ground looking very windswept, but considerably enlightened.  We were given some money to buy lunch, which mostly consisted of enormous paninis, pizza slices and coca cola.  We ventured all the way up the hill after lunch, in search of shops and an amazing view.  At six o’clock, we got back to the hotel for dinner, and returned to Sorrento for another delightful evening shopping.

The fourth day brought us a two hour guided tour of Pompeii.  At the time of its destruction caused by the eruption of Mount Vesuvius (79 AD), the estimated population was 11,000 people. The volcano destroyed many important things in the town, such as a water system, a gymnasium, a port and an amphitheatre. The eruption killed most of its inhabitants, burying it under endless tonnes of ash.  The city was lost for 1,500 years until, in around 1647, a Spanish engineer names Rocque Joaquin de Alcubierre broadly explored the city and found a diary entry written by someone who watched the eruption from afar.

After the tour, we went to a restaurant for lunch and ate enormous pizzas topped with cheese and tomato.  It was lucky we fuelled ourselves - the next activity was a climb to the top of Mount Vesuvius. The city stretched out beneath us and the sea looked amazing from so high up. We could see all the way into the crater, where there were mounds of volcanic ash.  Back on the coach, we drove all the way back to Rome, where we arrived at a rather posh hotel, and had dinner in a restaurant.  The same night, a football match brought many eruptions of cheering to rival that of Mount Vesuvius!

The last day of the trip began with a lovely continental breakfast.  We walked a short way to the Colosseum, which was so amazing that there was much exclamation from the students and teachers.  We were guided around the enormous Colosseum, where we saw the animal cages that were originally underneath the main arena.  The Colosseum was the place where hundreds of slaves and gladiators were sent to their deaths fighting each other, or against wild animals such as lions and bears.  Next, we toured the Palatine Hill, where we saw magnificent buildings and beautiful grasses.  It was boiling hot under the sun by this time and was a good time to have lunch.  We had huge sandwiches, cokes and crisps or fruit.  After lunch, we collected our luggage from the hotel and got back onto the coach.  The flight home was peaceful and without any delay.  Parents collected the students from the airport and we all made our way home.

Another year, another trip - thanks to Mrs Wiles and her staffing team (Mrs Charman, Mr Magness, Mrs Akbar-Phillips and Miss Evans) we were able to enjoy one of the best experiences of our lives.  We all had such great fun.