Status Racing has now become a well-established team, competing within the Greenpower International race series for the last seven years.  In that time, we have been ambassadors for the Surrey School Games Motorsport competition, and have represented Greenpower at the Sunday Times Festival of Education. Thanks to the team’s professionalism, we were invited to once again promote and represent Greenpower at the Siemens International Conference in March – at Thorpe Park!

The team had a prime position in the conference centre, inside the main park – and were able to speak to school parties, teachers and members of the public; promoting the values of Greenpower and sharing our own experiences.  The team engaged with interested students from local schools, but also international students from the Middle East and North America.

Obviously, we couldn’t miss the opportunity at the end of the day to venture out of the conference centre and enjoy some of the rides and attractions at Thorpe Park! 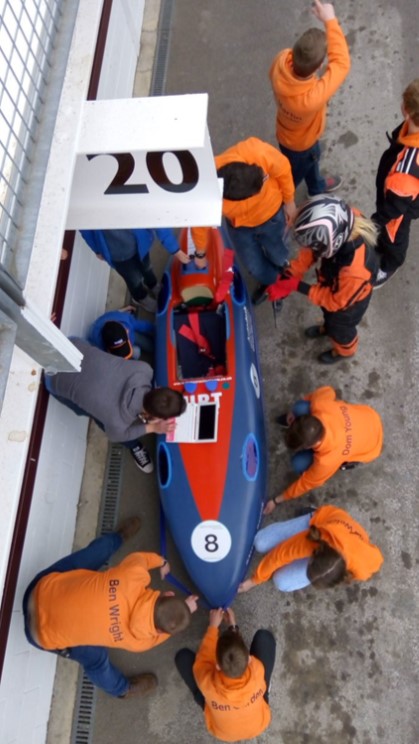 On Sunday 23 April, the team gathered at Goodwood Motor Circuit for the first event of the year; a day for testing the drastic modifications made to MK3 - and a chance for our 5 new Year 7 team members to get some driving practice in before returning to the same track in 2 months time for our first race.

The senior members of the team saw a 07:45am meeting for a quick car preparation, to ensure the car was at scrutineering when it opened at 08:30 in order to confirm that MK3 complied with Greenpower's sporting rules and regulations in a pre-race MOT. This allowed us to be out on the track as soon as it opened and imitate a usual 90 minute endurance race.

By holding our own mock-race, we were able to test this year's modifications and how well they have improved our race performance. The whole car has been raised upwards to allow better airflow under it (which we calculated would reduce our coefficient of drag). This raise allowed us to then remove the wheel bubbles, which initially housed the top of the wheel. In order to gain an accurate idea of just how these modifications would affect the outcome of future races, it was very important to mimic an actual race, right down to pit stops.

Ben Gurden started off the "race" with consistent lap times, however an accidental spin did affect the car's performance later!  This resulted in a recovery and after a swift pit stop - and some adjustments, it was Ethan Hare's turn in the car.  As always he drove smoothly following the racing line and keeping the fast, consistent lap times present, which were clearly displayed through our logged data on a graph, later reviewed in the team's reflection meeting.  Ethan did have a surprise when the rubber band covering the entirety of the seals of the two parts of the car's bodywork worked its way off the nose of MK3 and pinged backwards! Luckily this solution was easily resolved with some duct tape reinforcing during the final pit stop in order for Dominic Young to finish as our 3rd driver.

Since each practice session is two and a half hours long, we had additional time to allow Kenton Jennings, one of our new Year 7 team members the chance to drive.  This was an equally important part of the day as our new drivers really got an accurate idea of driving MK3 and got to put the theoretical driving lessons given to them into practice.

Between the two practice sessions all of the team chipped in to get the charged batteries swapped into the car and the newly ordered sprocket onto the car.  The data collected from race one needed analysing; normally a task for Dan Waite, former team member, who couldn't be present on Sunday; however was always only a phone call away when the team needed answers as to electrical mannerisms of the car and how to improve them!

The second practice session acted as race two for the team with the same drivers giving a repeat performance of race one, with the only difference being that Dominic was replaced by Livvy Retallack as the final driver.  Livvy experienced a sudden drop in speed and pulled in to allow the team to figure out what was causing the issue and to solve it.  It turned out that Ben’s spin in race one caused damage to the tyre and it needed replacing.  Once the tyre had been fitted it was our newer team members Nathan Cummings, Aaron Gibson and Jake Willows who finished off the day as our final drivers.

This test day was really enlightening for us as a team as we got to see the results of our hard work, through modifications to the car, physically make a difference.  I would like to say a huge thank you to Mr Winter for his constant dedication to the team and to Mr Todd for always being available to help the team.

We are really looking forward to returning to Goodwood Motor Circuit on Sunday 25 June for our first race of the season!