Student's Creativity has the Winning Formula

Year 10 student is a winner in the 'Who are You? 2' international art competition.

Many congratulations to Jenny Benson (10E) who recently became a winner in the prestigious international art competition ‘Who are You? 2’.

The annual arts competition, organised by the Arts University Bournemouth, tasked aspiring artists to express themselves by designing a poster they feel represents them as individuals.

As a winner, Jenny was invited to attend an exhibition at The Hellenic Centre in London on Wednesday 22 May which displayed all the winners’ artwork. As well as being shown in the gallery, artwork was also displayed on one of JCDecaux’s massive billboards in Tottenham Court Road. The winning entries will then be shown on 75 billboards around the country!

Here is an account of Jenny’s lead up to the competition and her special day in London: 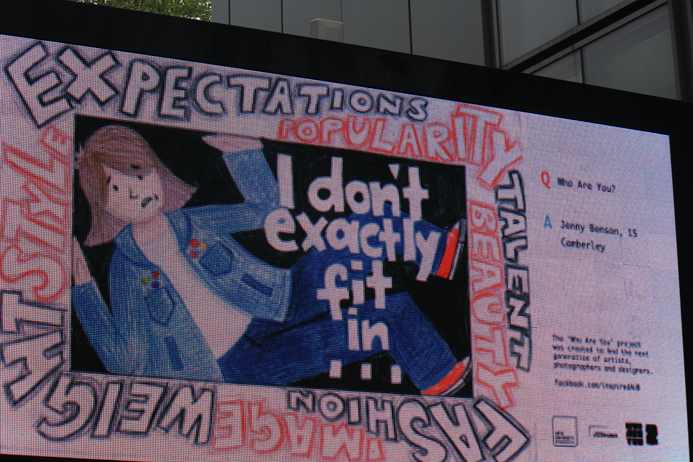 “In March this year, I was feeling quite bored and had nothing to do (yes, it was one of those lovely days when I’d done all of my homework) and so I decided to follow up a poster I had seen on the pin board of my art room. That competition happened to be ‘Who Are You? 2’ and it seemed that the brief, to summarise myself in a piece of artwork, was a brilliant platform for my creativity and a chance to enjoy myself as well as have the possibility of becoming a winner.

Several months, a shortlist and a public Facebook vote later, I find myself as one of the said winners on a train up to London to see my work exhibited in a gallery (The Hellenic Centre). It was really good to be able to meet all the other winners and their families, to find out what had inspired them and why they were doing this. It was just brilliant to be surrounded by like-minded people. We also went on an open-top Routemaster Bus to Tottenham Court Road so that everyone could see their work displayed on the electronic billboard there. Strangers on the street were applauding with us as our images came up and asking about what was going on. It was a really positive atmosphere and was a wonderful day all in all. Jenny Benson (10E)